Reclaim automatically adds blocks of time for you to catch up on email and other tasks in the morning and afternoon. Here's how it works.

During your Reclaim onboarding, you'll have the option to add Catch-Up Time. Catch-Up Time automatically finds and adds two 30-minute blocks to your work calendar each day -- one in the morning and one in the afternoon:

When Catch-Up Time is turned on, you'll start to see these blocks added to your calendar. They'll look like this: 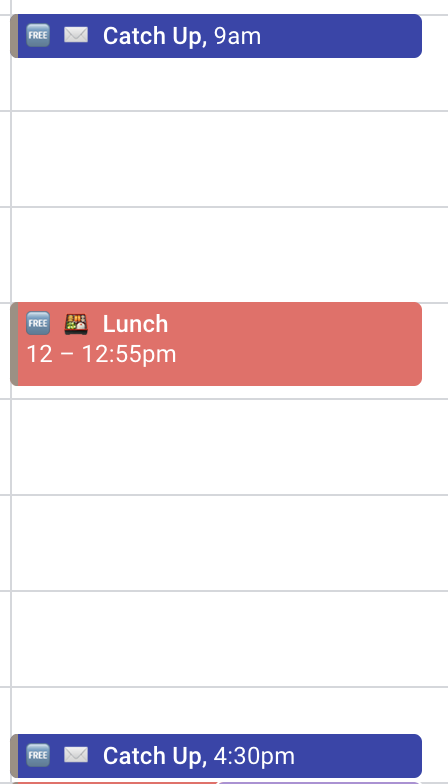 When Catch-Up Time gets marked as busy

If your day has a lot of free time left, these catch-up blocks will initially be marked as "Free" and have a 🆓emoji on them so that they don't appear blocked to others, preserving your flexibility. You'll see the catch-up time on your calendar, but others won't.

As your day fills up and as these events are booked over, Reclaim will automatically reschedule catch-up time. Once your day is deemed at risk of being too full -- when there is less than 30 minutes of free time left in the 9a-12p or 12p-6p windows, respectively -- the blocks will automatically show as busy to others.

Reclaim will also automatically mark Catch-Up Time as Busy 30m before the event is scheduled to begin so you aren't booked over at the last minute.

You can see this behavior visualized in the animation below:

Reclaim will respect changes you make to Catch-Up Time. If you decide you need an hour for Catch-Up instead of a half-hour, you can just change the event directly from your calendar and Reclaim will automatically mark the event as busy and will no longer move it.

Turning Catch-Up Time On or Off

Did this answer your question?